Due to Covid-19, we postponed the Mixing and Segregation seminar last year. With things gradually turning back to normal

We intend to organize the Mixing and Segregation Day on the 24th of October 2021 as a physical event. All the speakers of the first edition have confirmed to participate again.

Mixing and product uniformity is a very important aspect in many powder processes and preventing segregation to the lowest degree possible requires a specific look at mixing technology as well as the science of powder behavior and particle technology. It is important to understand the basics regarding the requirements needed for an ideal mixer suiting your specific needs.

What will the Mixing and Segregation seminar bring?

We have created a collaborative program designed for anyone who is working with or studies the mixing and segregation of powders and powder blends or works in the field of powder technology.

We offer both experimentally oriented lectures and modeling contributions to link theory to practice. The main part of this 1-day event will be a well-rounded seminar offering both theoretical know-how and practical information by speakers from various fields of industry.

Powder mixing is used in many different fields, from pharma to feed and bulk chemicals and many fields in between. The importance of a homogeneous mixture became very clear, specifically in the production of pharmaceuticals it is of (vital) importance that a patient in each case receives the proper and predictable dose. At a concentration of only a few mg of active substance per gram of inert, it is quite a challenge to get a homogeneous distribution. Accordingly, the particle size of the respective components needs to be very small to realize a uniform mixture.

For such small particles, it is per definition an arduously mixing process due to the greater interaction between the particles. In order to ensure a reliable and homogeneous mixture, many pharma companies work with pre-blends, in which the active components are first pre-mixed with smaller amounts of excipients.

Although much larger in particle size, the uniform composition of the feed is just as important, and for the same reasons, we want the feed substances to fit the correct dosages to create the optimal mix of nutrients for the animal.

Fluctuations in the homogeneity of feed will not only affect the welfare and performance of the animal but also affects the profit margins of the farmer. Therefore, it is undesirable that e.g. laying hens at the back of the poultry barn/ farm receive a differently composed product than hens elsewhere positioned in the barn/ farm. Similarly undesirable effects can arise if the product fluctuates on a day-by-day basis.

A Homogeneous mixture is only the beginning

However achieving the desired uniform, homogeneous product is only the beginning of the production cycle. As soon as the mixture is removed from the mixer the product can start to segregate again. For example, under the influence of movement, during the entire subsequent process of emptying, pouring, transport, tableting, and bagging. As a result, the quality of the product may be severely affected when it reaches its final destination.

The root cause for segregation/ de-mixing can be traced to differences in particle size, shape, and density of the different components. Smaller particles tend to sift because of their greater mobility.

This is generally referred to as free movement between the larger particles under the influence of mechanical movements. This effect may also occur while being transported by conveyer belts or gutter transport.

The result is that through the pouring process a higher concentration of small particles accumulates underneath the larger particles.

When pouring sand mixtures e.g. it nicely illustrates the larger particles focus mainly on the outside. In such a case, it might be wise to opt for several smaller stockpiles rather than one large one. This is made clear and can be identified by e.g. the angle of repose or by powder rheology. 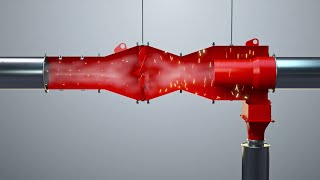